Flicker is a pale ginger she-wolf with a darker saddle, amber eyes, and red and black marks. Her left ear is double-notched on the side.

Flicker makes a brief appearance with four other alphas as they sit behind Rock and Sharp. She initially supports Fang's proposal to slaughter the cattle in the farm, but her expression turns hesitant as Luna points out the lack of honor in killing more than they could all eat. When Rock speaks up in support of her, calling her Starshine to try and hide her identity as an omega wolf, Flicker rallies her own support. She reminds the wolves that they were all taught as pups to respect life in every shape and every form, especially when they were forced to take it.

As the alphas agree with the words of "Starshine", Sharp calls from the top of the rock and asks again for Luna's name, as well as her rank. When Luna replies with her real name and pack, clearly avoiding the mention of her rank, Flicker and several other wolves turn suspiciously to her.

When Luna finally admits to being an omega, Sharp bolsters Fang by urging her fellow alphas to listen to the words of a respected leader, not a lowly grunt wolf. Flicker is last seen at this moment, scowling her disapproval at Luna from beside her.[1] 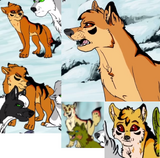 Retrieved from "https://cowofthewild.fandom.com/wiki/Flicker?oldid=10229"
Community content is available under CC-BY-SA unless otherwise noted.