Flutter is a pale gray, almost white, she-wolf with white paws, three ginger flecks speckling one flank, a ginger-tipped-tail, two brown-tipped strands of fur dangling over one side of her face, and green eyes.

Due to her early death in the series, not much is known about Flutter. Prior to her untimely death, she was a steadfast, devoted, and sweet-tempered Alpha Female. Her devotion and love for her family was what undoubtedly led to her death, as she jumped in front of the barrel of gun to save her daughter, Alari.

As a pup, Flutter's personality was very similar. She was bright, fun-loving, and bubbly - almost the polar opposite of Fang, though the two quickly grew past that and developed a mutual attraction.

Cliff: Alive (As of Romance Is Boring)

Bone: Alive (As of Love Hurts) 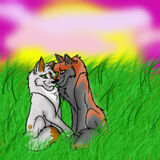 flutter and her family

Add a photo to this gallery

"I'm sorry I fell on you. I didn't scent you because I was chasing a rabbit. I'm Flutter by the way and this is my sister, Sharp."
—Flutter to Fang Times Change, Unknown

"Do you promise to stay with me forever?"
—Flutter to Fang Times Change, Unknown

Retrieved from "https://cowofthewild.fandom.com/wiki/Flutter?oldid=11917"
Community content is available under CC-BY-SA unless otherwise noted.