Jade is a blue-gray she-wolf with blue eyes, darker stripes on her cheeks and a heart shaped patch on her chest. Her cheeks, chest, belly, ears and lower tail half are colored in a darker shade of her main pelt color.[1]

Jade is smart and speaks her mind often. She doesn't like to be pushed around, but knows when she cannot win a fight, and tends to be the voice of reason.[1]

Jade makes a brief appearance with four other alphas, as they sit behind Rock and Sharp. When Fang speaks about raiding the cow farm, she is one of the alphas who speaks against it, claiming that they would be wasting prey, destroying their honor and put themselves into danger. 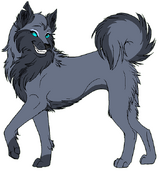 Jade appearing alongside Saibo, Fala, Gypsy, and Flicker
Add a photo to this gallery

Retrieved from "https://cowofthewild.fandom.com/wiki/Jade?oldid=11546"
Community content is available under CC-BY-SA unless otherwise noted.