Vadar is a large wolf with blue eyes, creamy-pale ginger and light brown fur and markings on his tail and neck.

He was the first King who united the Kingdom of the West.

This article is a stub. You can help Cow of the Wild Wiki by expanding it.

Yin-Yang tells the story of Vadar: He was the alpha to a single pack, but most of the other wolves followed him, because he had an air of authority, was gentle and kind, but had enough strength to put wolves who tried to overthrow him in their place. Soon, all the packs declared him king of the West. Vadar had three sons; Balder the Brave, Kahleel the Kind and Apollo the Strong. He was killed by Rune at the same time as Apollo and Kahleel.[2]

Fall From Grace, Rise To Power

Yin-Yang: Alive (As of The Meeting) 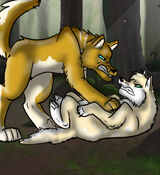 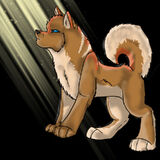 Add a photo to this gallery

Retrieved from "https://cowofthewild.fandom.com/wiki/Vadar?oldid=12027"
Community content is available under CC-BY-SA unless otherwise noted.